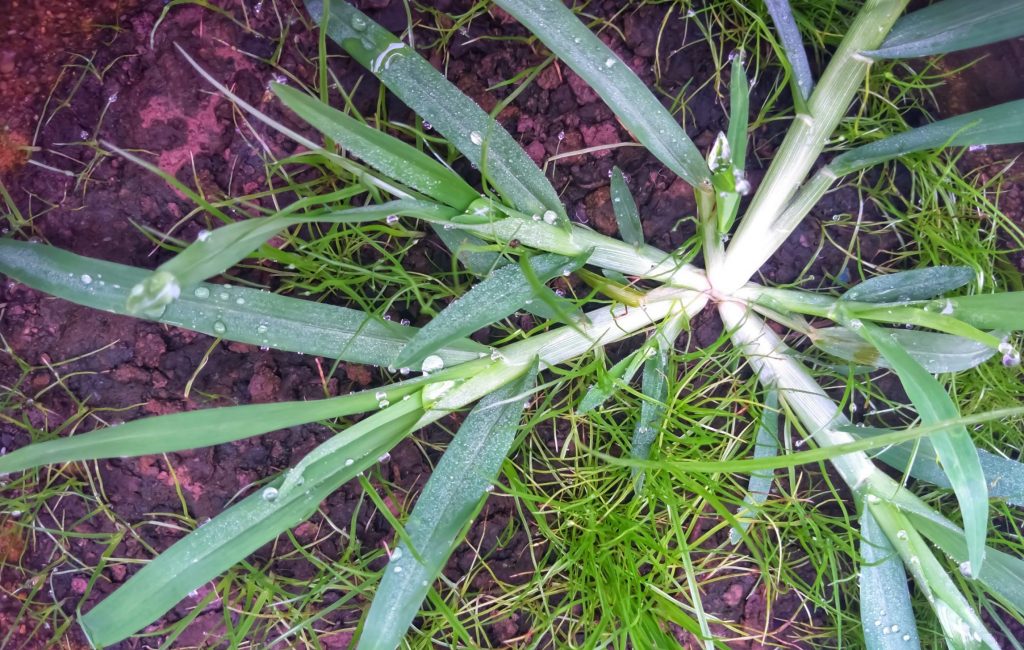 Goosegrass is a common Texas summer annual grassy weed that is sometimes referred to as silver crabgrass or wiregrass.

This clump-forming weed is often found in parts of lawns with compacted soil, high-traffic areas, and thinner sports turfs. It grows prostrate in lawns that have a close mowing habit but can grow upright in areas where it’s left undisturbed.

It’s known for its white to silver coloring near its base, which helps to distinguish this from crabgrass and other grassy weeds. Goosegrass germinates in late spring and produces seeds from summer to early fall.

Goosegrass has a fibrous root system that produces stems that begin to grow in a mat-like rosette. Stems are flat which produce leaves that are folded in the bud. Leaves grow to a blunt shape, may have long sparse hairs near the base, and can reach up to 12 inches in length.

Stems and leaves are white to silver at the base, but then continue on as green in color. Sheaths are flat, split with overlapping margins, and are hairy at the top and edges. The ligule is membranous with a collar like appearance that have hairs on the back and the edges. Auricles, stolons, and rhizomes are all absent from this weed.

Goosegrass produces a 3 to 7 spiked seedhead at the top of the stem. Seeds form in a zipper like appearance on the spikes and release during summer to early fall. This tough weed dies off at the first frost, but seeds can stay viable in the soil for years to come.

Cultural Control: Avoid mowing your lawn too close as this weed thrives in thin, short turf. Routine aeration of your lawn will break up any compacted areas in your soil and work to deter new goosegrass from residing.

Mechanical Control: For younger goosegrass, or smaller infestations throughout the lawn, hand pulling or digging are good options. Make sure to dig up the entire weed and root system and dispose of properly. Digging up larger weeds can be useful, as long as they have not produced a seedhead and are setting seed.

Chemical Control: This weed is best controlled through the use of a selective pre-emergent grassy weed herbicide. Apply in late fall and again in early spring before the seeds have a chance to germinate. Apply a selective post emergent herbicide in early summer and throughout the growing season to help deter any future growth.

Goosegrass prefers thin, short turfs with compacted soil. To prevent goosegrass throughout your lawn, make sure that your turf is dense and healthy. This can be achieved by mowing your lawn at its proper height, routine aeration and fertilization, along with proper irrigation. The use of selective pre and post emergent herbicides throughout the year will also help to deter this weed from sticking around.

For further help with goosegrass in your lawn, contact us today. Our team of highly trained technicians are experts with grassy weeds and can design a lawn care program to get your lawn back to its proper health.
50% Off First Service

Fill out the form below for a free, no-obligation custom quote! For immediate assistance, please give us a call at 972-899-9249.